For those seeking a silver lining in this entire debate and process triggered by dramatic decline in the ranking of Universiti Malaya (UM) in the World Universities Rankings table compiled by the Times Higher Education Supplement (THES) - "this" is it.

Since July and August, here in Education in Malaysia, we have put forth our views and opinions of the THES rankings, our consistent criticism of the university authorities in their celebration of their 2004 89th placement, our follow up and analysis of the 2005 rankings table, and lately, our disgust at the response of some of the university administrators to the steep decline in rankings. Jeff Ooi has blogged about it. Sdr Lim Kit Siang has written non-stop about it. I've seen many blogs which has linked or written to the issue since. And yesterday, Mack Zulkifli of BrandMalaysia.com has raised the subject and plugged this blog.

As a result of all of the above, the interest in the issue has been absolutely fantastic. Very much to our surprise, pageviews of this modest blog hit off the roof last week, despite being a public holiday week, hitting 6,800, more than double the prior week. Yesterday, thanks to Mack, the site registered more than 1,900 pageviews, a new high for Education in Malaysia.

The silver lining is not however, about hitting "new high" statistics. The silver lining is that we have had fairly open debate and discussions which have attracted many many readers and interested parties. Even the typically docile local press such as the Star have been publishing some critical comments on this issue. This, to a certain extent, is democracy and an increase in tolerance of critical discussions at work.

The outcome of the debate so far has put the vice-chancellor of Universiti Malaya on the defensive, and under pressure. The Star has even published a critical call by the Parliamentary Opposition leader for the Cabinet to publicly reprimand the vice-chancellor for his arrogant and indifferent attitude towards the severe drop in rankings.

Lim said the Cabinet should censure Prof Datuk Dr Hashim Yaacob for his public pronouncement that he was "not worried" and instead felt "great happiness" over the decline of the university's position in the international ranking.

The Minister of Higher Education himself has not been able to fully extricate himself from the UM debacle. It appears that he doesn't have the stomach to be critical of the vice-chancellor of his premier university for some reason or other. At the same time, it is noticeable that his "support" to date for the vice-chancellor has been lukewarm, with the only indication coming from his press interview with Bernama.

Shafie said that in terms of points, the results achieved by UM were still good but owing to the introduction of the positions and the inclusion of more universities in the ranking, its position slid.

"Performance-wise, the UM is still good but because the points between one university and the next are too close, even missing two or five points can result in a big drop in position," he added. 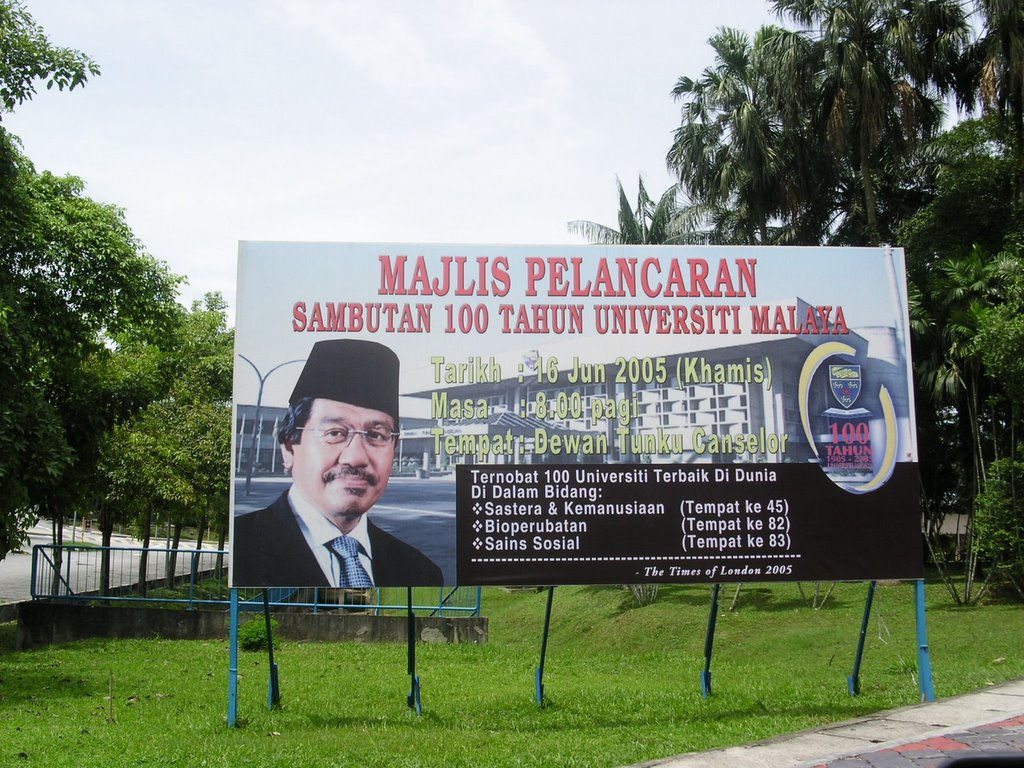 Will the Minister come to the Vice-Chancellor's rescue? Or wil they sink together?
This was just a regurgitation of what the vice-chancellor has earlier claimed to be the reasons behind the "improved performance". But it does appear that the minister is waiting for the issue to pan out or die a more silent death before making any further comments which may negatively implicate himself either way the issue pans out.

As responsible Malaysians, we really need to continue to raise the profile of this critical issue to address the decline in the standards of our public university over the years. We'd like to thank readers and bloggers alike to date for making this a high priority Malaysian issue.

To make sure that this issue is resolved favourably for Malaysians, we will continue to highlight it prominently in our blog and urge other Malaysian bloggers to do the same. For non-blogging readers, feel free to use the facts and figures which have been compiled on this site to write to the Star, the New Straits Times and the Sun. Not to forget, write to the MPs and ministers of your constituency and Barisan Nasional to express your concern over the leadership at our premier local university.

We hope that some time, one to two months from now, we will see more light at the end of the tunnel at least, for our higher education institutions.
Posted by Golf Afflicted at 11/08/2005 10:22:00 am

You are expecting too much - it is physically impossible for dunderheads like that to have more than one idea at a time - since it will cause a systems overload.

Thus, they keep their arguments to a very basic level", i.e.,

1. My son failed his exams last year, got D's in all subjects. Really terrible.
2. This year, he failed again! Three D's but, hey, damn good, man, he got a C in one subject!