As highlighted in the earlier post, the vice-chancellors of Universiti Malaya (UM) and Universiti Sains Malaysia (USM) will be having a meeting with QS Quacquarelli Symmonds founder, Nunzio Quacquarelli on the November 21st. The event is held just before QS annual World MBA Tour in Kuala Lumpur to be held at the Westin from 5pm to 9pm on Tuesday, 22nd November.

However, thanks to a post and a scanned leaflet by LONE, I understand that there is actually a Forum being held at Balai Ungku Aziz in UM on November 21st @ 2.30pm, conducted by Mr Quacquarelli himself. The main title for the event is "The THES Top 200 World Class Universities", and subtitled "UM in the THES 2005 International Ranking: The True State of Affairs". 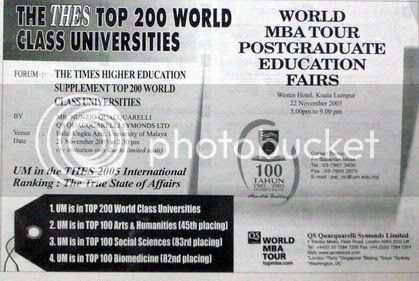 Unfortunately attendance is by invitation only, and this blogger has a day job which has booked him for an important presentation on Monday and will be unable to gatecrash the event.

But to anyone out there who has an invitation or is able to gatecrash, do keep me updated as to what was "discussed" during the forum.

However, based on the publicity leaflet alone, I'm prepared to put a little of my hard earned cash on the table to wager that QS, being a profit oriented commercial entity and its founder, will unlikely attempt a "Al Gore", making his host and possibly future periuk nasi lose face. The vice-chancellor of UM will likely have another opportunity to have someone sing "praises" on his new clothes. If only he looks into the mirror to see "The True State of Affairs".

The fact remains that UM is getting worse, academically, physically, and administratively. For people who work there in the last 15 years, there is no sense of improvement, growth, and joy.

On the other hand, there is a sense of decay and going down hill. Don't believe? Just visit the toilets in UM. Many years ago, a big sum of money was spent upgrading all the toilets in UM. Now, most of them are in a terrible state of condition - smelly, no water, water leaking, always wet floor, no toilet rolls or tissue paper, no soap, soap dispenser missing, mirror stolen, cubicle doors not lockable, hooks missing, no light, etc. First world facility - nah! Third world mentality - worse, 4th world!

The condition of toilets reflects the general state of an organization and a country.

Go visit the toilets of NUS and NTU and see for yourself how things improved there over the years: their lights and taps are fitted with sensors, automatic flushing, soap dispensers with soap, tissue rolls available, even fitted with a canister of air refreshener.

UM and NUS - a tale of two unis, one heading north and the other south. Can't wait to see THES 2006. Akan datang.

I would say UM making such a big fuss is good. Good to let us know that it has big problems, vanity and stupidity so that we can go in and kick their a** to clean things up.

Are you QS too? According to a report in the STAR, QS gave the exact reasons given by you for UM's THES 2004 ranking. The Chinese nad Indian students in UM then were considered foreigners!! Can we really trust such a screwed up organisation?
For what QS had to say check out this article in the STAR :: Rankings issue arose from error :: http://thestar.com.my/news/story.asp?file=/2005/11/18/nation/12625998&sec=nation