Well, Mr "David Smith" has continued to feed me with information with regards to the MBA scams perpetuated by a "Oxford Centre for Leadership (OXCEL), United Kingdom" which clearly abuses its non-existent association to Oxford University to gain credibility.

First of all, the OXCEL doesn't exist beyond a mail forwarding service provided at the contact address. You can check out the address yourself at the Regus website, an international service office provider.

The OXCEL company was only purportedly set up in the United Kingdom in April this year. However, as early as last May, Oxcel has been granting degrees in Malaysia. 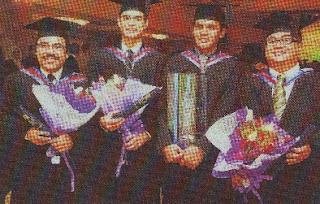 Not only did these celebrities clearly publicised the "school", it was Deputy Minister of Human Resources, Datuk Abdul Rahman Bakar who "launched" OXCEL in Malaysia last year at Carcosa Seri Negara. The modus operandi appears very similar to other dodgy degree-granting institutions such as the non-Irish Irish International University, where Deputy Minister, M Kayveas was also invited to present degrees at convocation ceremonies, which lends credibility to the institution.

(By the way, IIU continues to exist in Malaysia despite the tonnes of information available which discredits their standing. They have been holding convocation ceremonies on a year basis since 2002)

It is understood that the next convocation ceremony for Oxcel will be held at a college of Oxford university on 12 September 2007 for their 5-day MBA programme (or some equivalent award). All the graduates are allegedly Malaysians.

I really wonder sometimes why is it that in a country such as Malaysia, there remains plenty of such bogus institutions, guillible Ministers who are easily persuadable to lend credibility to dubious organisations as well as certification-hungry students who are willing to pay good money for poor qualifications.... sigh.
Posted by Golf Afflicted at 8/23/2007 09:58:00 am

was readin with interest your recent posting.

I think you gotta check with your source, and aslo the ppl of millionairesmba and oxcel.

the website does not state anywhere that anyone gets a degree. looks more like a school to learn how to become rich and successful.

they even state that MBA = Massive Bank Account. you gotta give it to them, I would like to join the programme too!

Branding the smokehouse as "The Traditional Oxford Smokehouse" makes me wanna go there for a holiday and enjoy the English food... i remember the family retreats when we stopped at the Gap, had to wait to go up, and enjoying the cool air. mmmm the scones!

"I really wonder sometimes why is it that in a country such as Malaysia, there remains plenty of such bogus institutions, guillible Ministers who are easily persuadable to lend credibility to dubious organisations as well as certification-hungry students who are willing to pay good money for poor qualifications.... sigh."

The answer is simple. Those institutions, Ministers, etc, of ours want to believe, and needed to believe, that if they were invited to any function, then that function must be a prestigious one otherwise, as the argument goes, the esteemed Minister's name would not have cropped up. TDM did not call them all "half-past-six" for nothing.

It is not that those Ministers are shameless; it is simply that they have absolutely no ability to discern the real from the imaginary. Like Yusry, surely they honestly believed that those degrees are real. Surely it must be clear to all that such incompetence (actually I am using this word as I am not able to come up with a worse description at this moment)forms the bedrock for the miserable state of affairs of our own tertiary institutions.

Imagine also their pride when comparing, say, the "standard" of Irish International University with our own UM; no wonder our Ministers continues to believe that our UM is of such a high standard. Compared to a nothing, to something that does not exist, UM shines with infinite brilliance. No doubt.

I cant help it, but everytime I think of the non-Irish IIU, M Kayveas immediately comes to mind. Wonder how that lawyer is ever going to live down that howler.

My company needs me to get an MBA and I need it quick. They wanted it by the end of the month. I thank you for your solution to my problems.

Oxcel are not a client of Regus and nor have they ever been. Regus Group plc.

I might like to point out there are other distance learning institution that ARE acredited.There is no point in getting degrees/masters from diploma mills that at the end of the day don't get you much.

Mind you there are no real short cuts in life/education and everything requires sacrifice.These kind of courses belittle the time and hardwork many genuine PART TIME student put in balancing work and studies. In fact it is down right insulting.

Why get worried over Oxcel?. Even our kindergartens and Akademi Fantasia all get scrolls complete with convocation gowns.

Can any one put this right?
Any comments?

I might sign up if they have a 'Pakej Garanti Belajar Sampai Lulus'. Seems tough with the Oxford thing on it. ^_^

Thank you for notifying us about this operation. I will refer the matter to Oxfordshire Trading Standards and Oxford University.

Why you put Education Malaysia?

Who mentioned that the Millionaire MBA offered from Oxford University? How you learn it from?

It comes from the Oxford Business College.

Thank you for reading.

British Graduate: Yes, the hood is attached to the button at the collar. It was interesting that when I got by PhD hood and went to the photographer, he pulled it way over the shoulder with the front near to the belly button. It looked more colorful that way but it was the wrong way. Attaching to the collar is the right way.

This is certainly an interesting post. Why are these dubious tertiary programmes "mushrooming"? And funny how they seem to get "local celebrities" to grace their events..

Next we'll have things like Cambridge Centre of Excellence..or maybe Asia Pacific Harvard School of Philosophy..

Event this eminent professor is listing his association to IIU. http://www.iuctt.edu.my/vcdesk/vchistory/vchistory.htm
So much for credibility!

Thank you for your messages. We have also been in contact with Mr Vine of DIUS.

I can confirm that this organisation has no connection with the University of Oxford.