There's plenty of other stuff to write about, but I thought I better "conclude" my budget series on education, before the 2008 budget gets announced. :) I've written four earlier instalments on my personal thoughts on the 2007 Budget for education - Overview, Unity or Segregation, Quantity vs Quality, Academics or Civil Servants. In this final instalment, I'd like to raise a very simple question, are we spending enough on education?

As highlighted in my first post on the Budget, a sum of RM33.4 billion is allocated for operational and development expenditure for Education, accounting for 21% of the overall 2007 Budget. This represents a significant increase of RM4.4 billion to be spent in the education sector compared to the previous year, which in itself is a substantial increase from 2005. However, the overall proportion of expenditure on education remains the same at approximately 21% of the budget.

Hence based on these numbers, the Budget appears to have allocated sufficiently for education. In fact, most might argue that in absolute terms, this is the best budget the Government has offered for Education. In percentage terms, the allocation for education has been consistent with the developed countries. For example, Singapore spends approximately 20% of its annual budget on its education sector as well.

However, I'd like to put forward a different perspective. If one studies the budget for the past few years, particularly for this year, Malaysia has become a country highly dependent on the oil and gas sectors for its income.

Petroleum income tax increased to RM20.4b from RM14.6b in 2005 and it constitutes approximately 30% of Malaysia's overall income tax revenue. The total oil-related revenue (including royalties and dividends) accounted for RM53.73b or 39.9% of total revenue. This is in contrast to the previous year whereby it accounted for RM45b or 37.3% of total revenue.

Hence it is quite obvious that our budget is to a very large extent financed by oil and gas, and the recent expansionary budget can be attributed almost entirely to the increase in price of oil and gas.

As per the chart below extracted from the Malaysia Economic Report 2006/7, our oil and gas reserves will last us for another 20 and 34 years respectively. This number will of course vary when we discover new oil and gas sources (longer) or production volume is increased with better technology and efficiency (shorter). However, we all know that our reserves are finite, and from the statistics, it may not be that long before we are out of oil and gas. It is hence, a little alarming, albeit a bit prematurely, that as much as 40% of our total revenue will disappear totally not too long down the road. 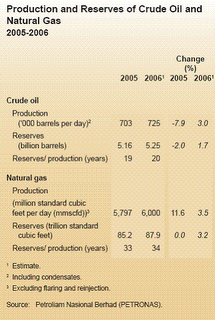 The question then is how do we "replace" the income from this lost commodity in 30 years' time?

I'd make a a simple analogy to lottery winnings. Oil and gas found in our land and waters are essentially Malaysia's lottery winnings. They are one-offs and unless you are lucky enough to strike again, that's all you've got. The simple question then, is how best to spend the lottery winnings? Do you treat everyone to a lavish dinner? In which case, there will be no multiplier effect as besides the utilitarian moment of joy in eating shark's fin and abalone, there'll be nothing left to show for dinner except the processed output the subsequent day.

If however, the lottery winnings are invested almost entirely on training and education, the winner will be more likely to become more productive, earning him or herself a better opportunity for promotion or higher value activities which will in turn result in improved future income and opportunities.

Hence, my argument is very very simple. Given that our budget is pretty much financed by oil, which is scarce, shouldn't we be a little bit more ambitious and expend a higher proportion of our income on education, instead of just being at the same level as developed countries? Given that our education system is far from being anywhere near the top of the world, shouldn't our gift of oil and gas be utilised in the most productive manner possible so that we can narrow the gaps?

Where can we spend the additional money on? Well, as I've argued earlier, teachers and academics need to be differentiated from the typical civil servant. Most importantly, the basic economics of the situation is that it must be worthwhile for quality individuals to pursue the career of being an education provider. The money can be used to enhance the quality of research in some of our better universities (instead of being used to construct more political universities). Or the money could be used to sponsor more qualified candidates to pursue their further education at some of the top universities overseas.

Hence the only way in which the country will be able to cope with the day whereby we either run out of oil and gas or when it becomes uneconomical to extract the due to better alternatives, is to have a better educated population from quality institutions through increased productivity and its consequent multiplier effects on the economy. I'd like to call on the Government to demonstrate better long-term strategy and greater ambition in the next year's budget so that our expenditure on education can be increased further to at least 25-30% of the overall budget.

We have a far greater impact than the education if the oil fields run dry. That is, where can we obtain more energy to supply the ever increasing demands from various industries to support our economy and feed our vechicles with gasoline and diesel. But that's a problem after decades pass by.

Besides, we don't want to see another scandal akin to the case alleged by Datuk Ong Tee Kiat and proven correct by the Work Ministry. The fund allocation itself becomes a big question mark for us, the rakyat. No matter how monumental the Budget is allocated to the education sector, we must utilise it efficiently. Quantity will not solve the problem. Look at what we have here, thousands of unemployed graduates and the population is still increasing. Will the job market grow overnight?

Yes we need more knowlege workers and professionals to help develop the country in order to achieve her Vision 2020. Actually we have already abundant in place. But the Government does not appreciate them with its discriminative and biased policies which have curtailed their ambitions coupled with their skills are appreciated more in other countries, hence the brain drain issue crops up. Can we be proud to be the exporter of home-grown talents and scholars?

Finally, rather than increasing the existing Budget for education, we should strive for transparency and accountability in the spending of the education budget and make the expenditures public for all of us to judge and possibly let the rakyatto have some says in order to improve the following Budget.

I think that no matter how much money the government, or more precisely the citizens, pour into the education sector, there won't any improvement at all. Money is not going to solve all the problems we have now, but will only further deteriorate them.

As long as NEP is still on, the country will only get worse, as commented by KM and TP earlier "Academic Jokes". If we take a close look at how the funds are distributed, 80% of them are actually used to feed the so-called Bumiputera, and the rest only for the nation's interest as a whole. Do they really think that the Bumiputera will improve by spoonfeeding?

I guess no point commenting further on BN's policies. It's a secret all of us know.

Why bother to ask this question when the education system itself is in great doubts? You have a system where the best are exported, the majority are unemployed and the employed are on crutches. Ask when are they going to pay back their study loan, that would be more relavent and I am sure it will help solve the cash flow problem.

..and i thought s'times education is similar to "gambling" in a way..ie..the amt. $ is always not enough..gamblers always want to gamble and win more..and schools / universities always want more funding.. :)