Sigh. There's just an incredible need for our civil servants, politicians and academics to make themselves "look" really "good". First, we get "brown-nosing academics" and now, we have really "thick-skinned academics". Thanks to a reader at Sdr Lim Kit Siang's blog, we get a picture of the UM academics loudly proclaiming their "achievement" of world class university status. See picture below: 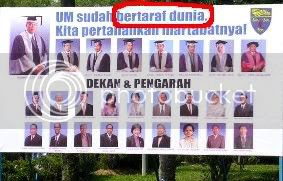 And of course, the largest picture belongs to the Universiti Malaya vice-chancellor, Dato’ Professor Hashim Yaacob (far left) - who was recently embroiled in the debacle involving Dr Terence Gomez.

It is clear that the honourable vice-chancellor is basing his loud proclaimation on the 89th placing achieved in the World Universities Rankings table compiled by the Times Higher Education Supplement (THES). Readers of this blog will be well aware of the discussions surrounding how the 89th placement was likely to have been achieved based on invalid assumptions.

I cannot help but wonder, which other world class university in world actually puts up large bilboard advertisements with the faces of the senior academics to proclaim themselves "world-class". I certainly do not see it at our neighbouring universities, National University of Singapore (NUS) and Nanyang Technological University (NTU), ranked 18th and 50th respectively by THES. And I can say with certainty that no Oxford don worth his salt will ever want to have his face plastered on such an embarrassing bilboard of self-praise, even though they are ranked the top 5 in the world.

Instead of doing the nation proud, the bilboard will merely make a laughing stock out of Malaysia's premier university. The whole episode brings to mind a bucketful of meaningful Malay idioms.

Gedang sebagai dilambuk-lambuk, tinggi sebagai dijunjung. The honourable vice-chancellor has been proudly praising the "world-class" achievements of Universiti Malaya, whilst they were most likely totally absent.

The honourable vice-chancellor should instead pay heed to the idiom - subur kerana dipupuk, besar kerana diambak, for one's status and achievements in society is not based on one's own proclaimations, but on the recognition by all peers and followers.

On top of that, given that THES is likely to revise their methodology and make adjustment for errors made in the first edition of the world university rankings table, it is very likely that Universiti Malaya will find itself on a free-fall on the rankings table. What will the honourable Vice Chancellor say then? Will he take down the bilboard proclaimation? Hendak harum terlalu hangit.
Posted by Unknown at 9/21/2005 09:11:00 pm

So typical in this part of the world.

I remember when I was working in Indonesia a few years back, a few ceremonies I attended (wedding included) where the MC read out the academic titles of the people in question after mentioning their names. So print it on their wedding cards as well.

You only blow your own trumpet when air is the only thing you have!

Well..fame does not last long, effort does!

It take double effort to maintain the present ranking, and it takes much more to move up the ranking..

As a premier in Malaysia, I really wish to see UM does more to promote
intelectual and quality academic activities in our country..


Globalsan
--writing to you from world ranked 69th campus

As a premier "univesity" in Malaysia....

I take it some of the deans pictured on the promo didn't willingly agree to this? Please I hope?

You all whack like that sure the UMian susah hati mah.

The comments did not suggest that UMians are "incompetent". It was to raise the awareness as to how some of our senior academics and administrators at our local universities are spending their time and money.

Hi, do you have any resources on campus elections results of University Malaya from 1998-2004? Thanks

Delusional of grandeur by the people in UM.

Their work is a joke, their research is a joke. The education standard in Malaysia is so bad that itis frightening. Yet people inside do nothing about it. Good job for screwing up big time and making more politicians to govern Malaysia.

I am an educator who is currently pursuing a Masters degree in UM .. not because I need to but because of the extra alphabets to place behind my name.
As an educator I have seen the severe drop in the quality of students over the years. When I was a Form Six student, it was soooooo difficult to qualify for the science stream. A student's aggregate for 3 science and maths subjects must not exceed 8. When a classmate of mine lamented to the Physics teacher that she just could not understand the lesson taught, she was bluntly told to rethink her decision to study Form Six.
Nowadays it is sooooooo easy to study science in Form Six. All you need is to have an aggregate total of not more than 18. That works out to a maximum of 6 for physics, chemistry, biology, add maths or maths! (Over the years from 1980 to 2004, the SPM examination has become easier and easier. There are many SPM examiners who can confirm that many students who scored single digits - marks less than 10 in their school assessment are able to get a "6" in their SPM, But the Bahasa Malaysia paper is getting harder and harder! What are we trying to achieve?) Isn't that wonderful? We can then loudly proclaim to the whole world that we can produce soooooooo many science students. Don't get me wrong. There are brilliant students that I have taught who are truly intelligent, creative, discerning and truly excellent at problem solving but the number is truly dismal. There are MANY Form Six students that cannot even answer questions based on the Form Five syllabus. These students cannot even memorize important formulae, let alone apply what they have been taught! So how can we produce excellent students when the students themselves are of poor quality?
Part of the blame is on the teachers. There are many teachers around who cannot string a decent sentence in English. Some teachers are really lazy and have reached their maximum pay, who are "burnt out". One colleague of mine is more interested in coordinating her wardrobe than teach. She unashamedly tells the students to copy the Biology notes that she has conveniently "borrowed" from another teacher so that she can go the school canteen to eat fish balls and drink coffee. She disappears for 30 to 40 minutes before coming back to the class and telling the students, "Let's continue the lesson". When parents complain, the senior assistant tells them, "There is nothing I can do. You know that teachers have an iron rice bowl."
One of our country's visions is to mass produce graduates. Who cares about the quality as long as we can boast to the whole world that "Malaysia Boleh!" The Malaysian mentality is to lower the standard just so that more people can "qualify". Over the years the quality of education in the country has dropped tremendously. In this year's PMR science paper, the students were mainly tested on the language aspect. There are very few actual science questions. THis is so because when the results of the PMR exam is out, we can then proclaim that the teaching of science and maths in English is a success due to the high percentage passes. And can you believe it? The results have improved tremendously. So the use of laptops and modern technology in the classroom must have been a success! This will please everyone because a tremendous amount of taxpayers' money was used to buy these laptops. For those who are not familiar with the education scenario in Malaysia, everytime we want to declare that so many of our students are excellent, we just lower the requirements. You want 99.99% or even 100% pass in Science? No problem!! Do you remember the STPM fiasco in 2003 where more than 1000 STPM students obtained 4 As? As a result, there are so many "bright" students who were denied a chance to pursue a career in Medicine.

Another education fiasco is the Matriculation which will never be gotten rid of. Unlike SPM where there is one common exam for all, there are two separate pre-university exams. THe majority of the STPM students are non-bumis but the majority of the Matriculation students are bumis. It is claimed that these two exams are the same. How can this be so? Everyone knows that even two STPM exams taken in different years do not yield the same results.
Fast forward .. This eventually leads to the mass production of poor quality graduates who cannot even solve simple problems without their teacher or lecturer spoon-feeding them with answers. Some lecturers even conduct private tutorials to help some privileged students "excel".

Now that I am back in UM, I can personally testify to the academic environment there. As all of you have suspected, many of the lecturers cannot teach. The few excellent, qualified lecturers have left for greener pastures or been told to leave. Some lecturers hide behind student presentations. In one particular course, the lecturer just sits at the back of the class and gives us assignments after assignments to present, week after week. Some of the seniors who have taken the particular course told us that it does not matter how well you have presented your assignment or how well you have answered your exam questions; what matters is your skin colour. It does not really matter to me because I feel that we are all accountable to GOD.

UM wants to attract foreign students to study in UM. But do you know that majority of the signs in UM are in Bahasa Malaysia? Even seminars where these students are required to attend are in BM with a smattering of english thrown in for "the benefit of our foreign students". These students just sit there quietly without an inkling of what is happening. There was a seminar where two books written by several lectures was launched. Ooohh ... we are sooo proud aren't we? The books were written in Bahasa Malaysia. But don't you foreign students worry, a translation of the books in english will be out soon.
Malaysia proudly and loudly declares to the whole world that it is the centre of academic excellence when Singapore who is much, much, much better than us does not even claim as such. I feel that we are ripping off the foreign students. We claim that we have the best facilities and educators around when it is not so. I am so ashamed that our country has stooped so low.
So where is the rot? How do we stop the rot? Can we stop the rot? Do we want to stop the rot?
If education policies and politics do not change, then I guess that we can at least boast to the whole world that we have the largest number of "universities" producing the largest number of unemployable graduates.

WildRose ... u shld try and get yr Masters in Singapore instead ..i think u can do well there ...