For those interested, below is the list of the Top 20 universities of the world compiled by the Times Higher Education Supplement (THES). You may download the pdf version of the full listing of the Top 200 universities here courtesy of Jeff Ooi.

My alma mater moved up one spot from 5th to 4th, whilst the other place managed a bigger jump from 6th to 3rd. Kian Ming should be happy for Duke University (where he is now) made a major leap from 52nd to 11th. His other alma mater, London School of Economics remained fixed at joint 11th with Duke. See top 20 universities below. 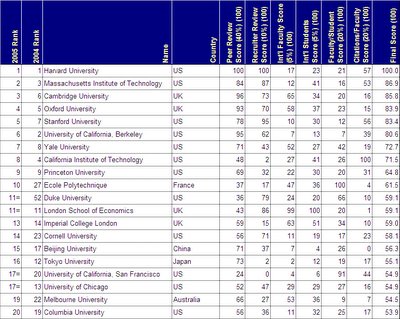 Both universities in neighbouring Singapore remained in the top 50, with National University of Singapore taking 4 places down at 22nd, while Nanyang Technological University improved by 2 spots to 48th. Interestingly, Chulalongkorn University of Thailand debut on the rankings table for the first time at 121st, comfortably 48 slots above Universiti Malaya.

The Top 100 list is dominated as expected by universities from the United States, taking up 31(35) spots, United Kingdom taking up 13(14) spots while Australia made 12(11) spots. Asian universities made up 15(13) spots, with China taking 4(2), Japan and Hong Kong 3 each, Singapore and India 2 each, and the remainder from South Korea. Previous year statistics were provided in brackets.

The key change to this year's methodology is basically the inclusion of "employer's feedback" with regards to which universities they prefer to recruit from. This "recruiter review" carries a weightage of 10%. At the same time, the peer review survey carried out by QS Quacquarelli was expanded from 1,300 respondents worldwide to a significantly larger same of 2,375 academics for the latest compilation table.

Although the "recruiter review" carries only 10% weightage, it is a component which may make significant differences in rankings due to the tiny gaps between ranked between 83 to 200. There's a gap of 70 points in "overall score" between no. 1 and no. 83, but only 9.2 points between no. 83 and no. 200. As an example, although Chulalongkorn University was ranked 48 places above Universiti Malaya, the difference in points was only 3.1 of which due to a favourable recruiter review for the former (16) as opposed to (0) for UM, it contributed to a overall 2.4 difference after taking weightage into consideration.

Hence, it is my personal belief that for the THES rankings table, the top 50 positions maybe fairly accurate, whilst those nearer the bottom may fluctuate wildly due to more subjective data. However, this is purely an exercise meant to provide the estimated position of a particular university to serve as a guide for prospective candidates. It is a useful guide, but at the same time, should not be taken as the biblical truth. :)
Posted by Golf Afflicted at 10/31/2005 12:01:00 am