Inspiration to us all

One would probably figure Yap Xiang Ling for a normal teenager if one were to meet her in person. But she almost died shortly after childbirth and despite being hearing impaired, she was recently accepted into Harvard. It's very difficult to get into Harvard even if you're a very bright, articulate and accomplished American. Only a handful of Malaysians get into Harvard every year at the undergraduate level - probably not more than 5 a year and that's an estimate on the high side. To be able to overcome a childhood handicap and get into one of the most prestigious universities in the world is truly a remarkable achievement and should be an inspiration to us all who complain about the little, little things that we have to deal with in life. 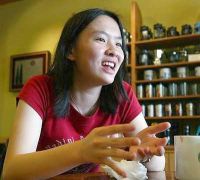 But I'm sure that there are many other such stories out there. I gather that Xiang Ling was luckier than most in that she's had a relatively comfortable upbringing (She studied in Singapore and Hong Kong where her father worked and she's currently in UWC in British Colombia, Canada). Many other Malaysians from relatively modest backgrounds would have had the opportunities that Xiang Ling has had. Which makes their stories of academic success all the more remarkable.

A friend of mine from secondary school in Singapore is a brilliant mathematician. His father drove a taxi. He went to Imperial College in the UK on a government scholarship and could have gone to MIT to do his PhD under a Fields Medalist (the mathematics equivalent of a Nobel Prize) but had to go back to Singapore to serve his bond.

I know of another undergraduate here at Duke who is from a small paddy planting community in a rural part of Selangor. He got a scholarship to do his IB in UWC in Hong Kong and now he's in Duke, where he receives a substantial amount of financial aid.

My fellow blogger is a modest guy but his own story parallels the ones that I've put down above. Perhaps Tony should tell us a little more about his own personal story? I'm sure many out there would find it pretty inspiring :)

I'll write my little story-lah but as little anecdotes within the blogposts whenever its relevant.

But I'll summarise that I'm not as disadvantaged as my hearing is perfect (although my brains are a little scattered), I have a guardian angel and a lady luck looking after me making sure that the right things happening at the right time and I put in my little bit of hardwork lah.

So, I have every bit of admiration of Xiang Ling. :-)

the average number of malaysians who get into harvard for undergrad studies per year: 1.

last year was an anomaly, with 2 malaysians and a malaysian-based us citizen getting in.

but that makes xiang li's accomplishments shine all the more brighter. :)

on the other hand.......we may get at least 10 students entering oxbridge respectively for each academic year....maybe higher according to some tabs and oxonians.....

She's surely one in a million.

Actually these days about high 30s gets into cambridge while about 20 + gets into oxford.

btw.. i think shes the 1st malaysian who got into harvard via Early Action. Correct me if im wrong...

That means that this year prolly another 1 or 2 MIGHT get in in the regular decision too. Cheers.

Is she a Malaysian chinese... or a Canadian? I'm just saying this because she's been studying for many years in Canada, which _may_ improve your chances.
How many true-blue-100%-educated-in-Malaysia-never-studied-overseas students get into Harvard anyway?

None? Of course there are. Don't underestimate Malaysians. At least one every year.

It is quite easy to increase the number of malaysians entering Harvard-->ask one of our brilliant ministers to wield his keris in front of Harvard's VC, demanding at least 100 to be accepted into Harvard each year...=P

Harvard doesnt kowtow to any form of coercion. They have rejected $100 million gifts for the sole reason of having to display the names of the sponsor. What can a keris wielding PM do that other countries' leaders cant?

Xiang Ling was from GIS prior to getting into UWC. She is a Malaysian Chinese.

There are true-blue-100%-educated-in-Malaysia-never-studied-overseas students (sic) who got into Harvard in the past. Nicholas Khaw who got in last year is one of many.

So, how have any Harvard-educated Malaysians contributed to Malaysia's advancement since their time there?

Well, there was Professor KS Jomo who attended Harvard for his MPA (prior to that he was at Yale). He came back to teach... but look what happened to him...

He also did his PhD there btw.

was joking actually on the keris wielding thingy...these people can't even take up an assistant post if they are not in the Government...ok i know i am exaggerating...

hahaha...SPM & PMR will improve every year...does it mean those like us who took it in the previous years ago are not as good?hmm...

google her name and GIS together you would find some stuffs about her in the interact club @ GIS.

Xiang Ling spents most of her education in Malaysia. I think she spent a couple of years in early primary school abroad, but for the rest of it, she did it in GIS, Malaysia.

Personally, I find her being a very humble person, despite her achievement. She is very willing to share, and is a person who is very grateful to many others, who may have helped her directly or indirectly in her pursuit of achieving her dream.